Posted by admin on Monday, November 21st, 2016 in Behavior Issues
no Comment.

I sometimes get called by a dog owner wanting to know if I can “cure” a dog of chasing cars. I always feel dismayed that the habit was allowed to start in the first place, because it is extremely self-rewarding and therefore difficult to correct. A dog who chases cars has found a way to have fun all by himself. Plus, he always wins because when he chases the car, the car runs away!

I don’t think it’s fair of me to charge the dog owner to observe the behavior, and then say that the problem is exceedingly difficult to correct, when I already know that. More often than not, the dog owner will not be able to implement the plan correctly because it’s hard to control all the variables. And one slip-up can mean that the dog gets hit. 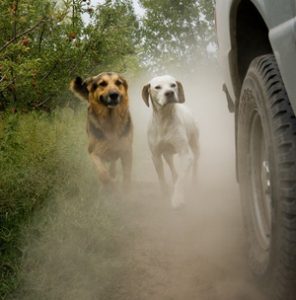 More often than not, no one is happy to hear me say that the best course is to manage the behavior by preventing the dog from engaging in it. This advice is free, however, and honest, and I hope it is heeded.

For their own safety, dogs need to be contained and/or monitored if off leash. Releasing them to roam at will may been feasible in the early part of the 20th Century, before everyone had a car; now, however, it’s simply too dangerous. People say they feel bad for constraining the dog; my response is that they will feel much worse if their dog is injured—or killed.

If a dog has started chasing cars, usually it’s because he’s bored. High-energy dogs, especially the herding variety that were bred to chase things, need a job or some form of entertainment to channel that energy. Teaching basic obedience or agility can help; as well as long walks or engaging the dog in games such as finding treats or toys around the house or yard.

It is, of course, best to prevent a dog from starting the behavior in the first place by keeping him contained. But once he has acquired the habit, it’s hard to correct, so keep your dog safe inside or in a fence. Don’t give him the opportunity to engage in this potentially deadly behavior.

For help correcting chasing cars and other behavior issues with your dog, contact certified trainer Laura Garren today at 864-245-7303.